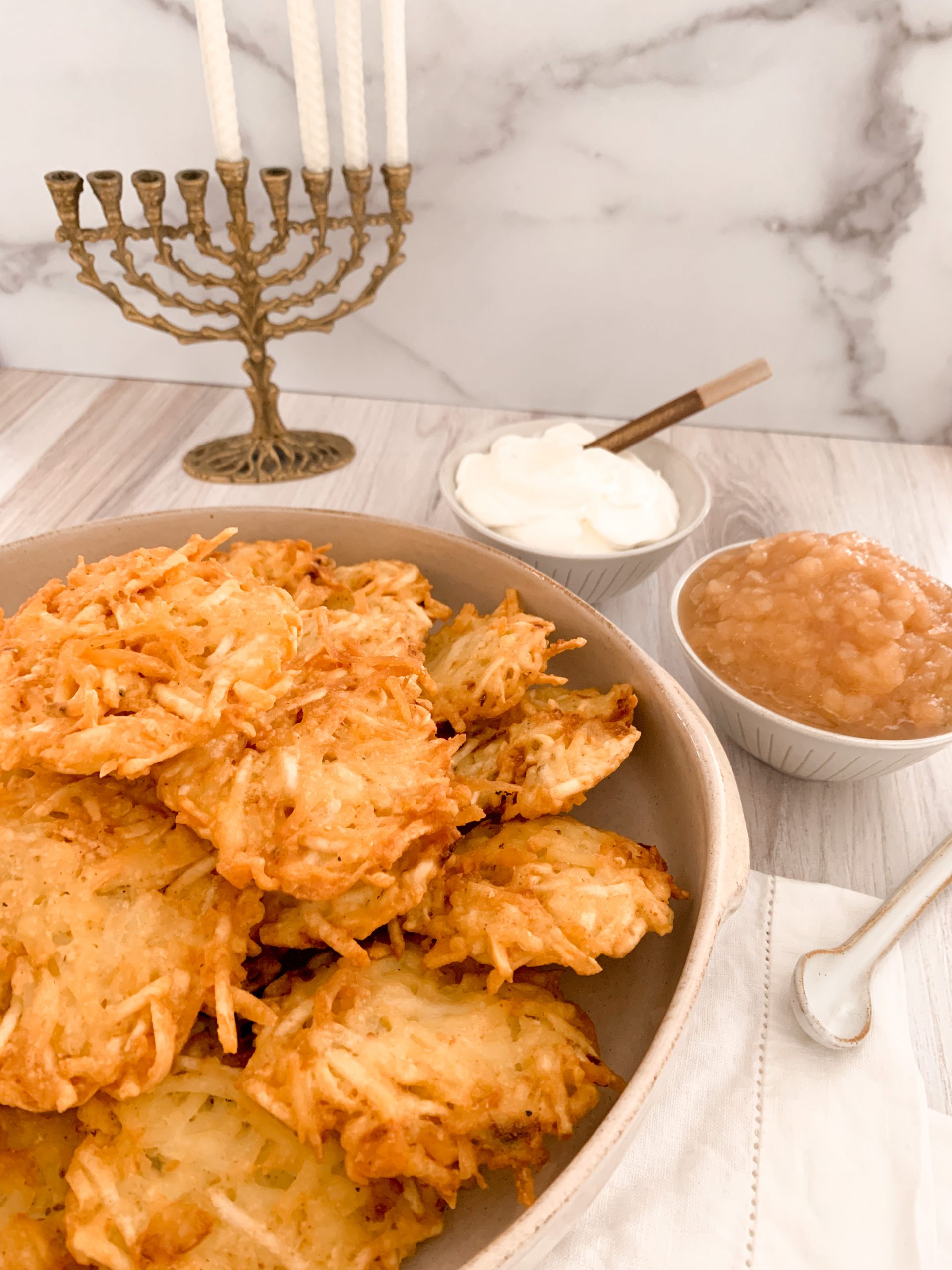 Happy Hanukkah to those who are celebrating! I’ve been meaning to post more frequently, but the end of the fiscal year at work and the holidays snuck up on me, and here we are – three days into the holiday. I learned how to make latkes from my daughter’s great-grandmother Jane, because they were not a staple in my house (Hanukkah for me has always meant fried sweets like sufganiyot or zalabia soaked in orange blossom syrup). American Jewish food tends to center around Ashkenazi recipes that were brought from Germany and Eastern Europe – then adapted to available American produce and goods: most American Jewish holiday meals will center around a beef brisket, and for Hanukkah – fried potato latkes, served with applesauce (if your family is German) or sour cream (if your family is Eastern European), or sometimes both.

My husband, being of both Polish and German extraction (among other things) never met a potato dish he didn’t like, and so latkes quickly became a staple Hanukkah dish in our family. As we speak, I am frying about two hundred (not a typo) of them for our annual Hanukkah party, where we put out a latke buffet with both Ashkenazi and Sephardi toppings and let people build whatever combination their heart desires – a latke topped with lox and cream cheese or topped with hummus and tabbouleh? Up to you.

A word on potatoes.

Our Hanukkah parties used to comprise of eight to ten people, mostly close friends and family. Then word got out about the free fried potatoes and quickly ballooned to upwards of 30 people – we once had fifty people at one of our parties, with our tiny apartment spilling out into the garage and street (no joke), and I quickly realised there is no easy way to shred and drain potatoes when you’re making 200+ latkes. I have grated by hand, used my food processor (not recommended), and used both fresh and frozen shredded potatoes (bagged hash browns) and honestly? There is no difference in taste and a whole lot of difference in effort.

I realise the choice of using pre-shredded potatoes is considered blasphemy by some, but when you are feeding a massive group of people shredding 20 pounds of potatoes by hand on a box grater is torture and I simply won’t do it. If you’re just feeding a family then by all means use a box grater and drain the water from them as much as you can: moisture is the enemy of latkes, and will make them fall apart / gummy. I promise you the texture of your latkes will be amazing even if you use the pre-shredded stuff. 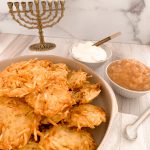 This recipe makes about 20-24 palm-sized latkes.  You can absolutely use fresh or defrosted pre-shredded potatoes for this. You won’t need to squeeze the liquid from them if this is the case. If using fresh potatoes you can prevent them from oxidizing (turning grey) by adding ¼ tsp of ascorbic acid (vitamin c powder) to the mixture. You won’t taste it (I promise) and it’ll prevent them from discolouring. Need to make these ahead? No problem! Simply allow to cool to room temperature and freeze in a plastic bag. Defrost the night before and reheat in a 425°F (220°C) oven for 5 to 8 minutes or so until crispy.
Tags: ashkenazi, chanukah, fried, hanukkah, how to make, jewish, jewish food, latke, latkes, perfect, potato, side dish, traditional